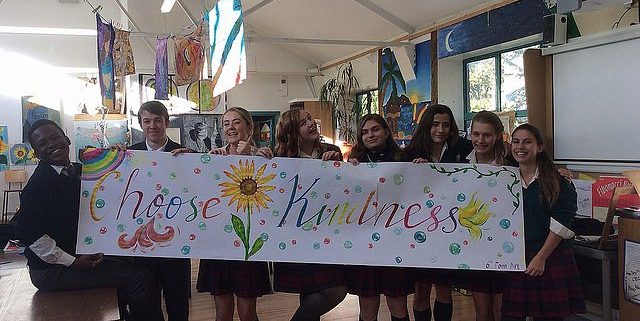 Last week was Bullying Awareness Week and I was impressed by the seriousness with which everyone contributed to a thought-provoking and stimulating week. My experience of St. Columba’s is that this is a very caring and kind community and I am convinced that there is no culture of bullying here at the school. However any principal would be naïve if he or she claims that they are running a school with no bullying at all and I am careful never to claim such. Any school, anywhere, is always at risk from an unwanted and potentially damaging episode of bullying, because wherever there are people living and working together tensions can arise, words can be said and emotions can boil over. Surely it is better to talk about these things out in the open that to pretend that they don’t exist. That is why I was pleased with last week, as there was a mature engagement from the whole community, both staff and pupils.

A school should not be judged on whether issues of bullying arise but on how they are dealt with when they do. Unless something hugely sinister has happened bullying can generally be dealt with by honest confrontation and conversation. Young people rarely set out to bully others but are sometimes drawn in to unkind behaviour by an insecure desire to be popular. In most cases they are surprised and horrified by the possibility that they have been bullying others and, when they are asked to look at their behaviour honestly, are open to correction and usually to apology. The strength of a boarding school is that it teaches young people to live together in close proximity with others, many of whom may not be their first choice of friends. In that environment one has to learn to get along with all sorts of characters, to be patient with people whom you may find irritating and to appreciate diversity and difference. That mirrors life itself, because, let’s face it, we all have to learn to live and work alongside people whom we may not choose as our friends. The sooner we learn to deal with it the better.

In 23 years in boarding schools, and running a boys’ house for eleven years, I have seen, time and time again, disparate groups of individuals become very close knit friends because they learned to appreciate and enjoy each other’s different gifts: the rugby player learns from the academic; the musician learns from the actor; the naturally loud character learns from the quiet one. The fact is though – and this must always be remembered – that living together and creating a safe place where young people can thrive and grow takes hard work and may involve some setbacks. But it is worth it.