You are here: Home1 / Boarding 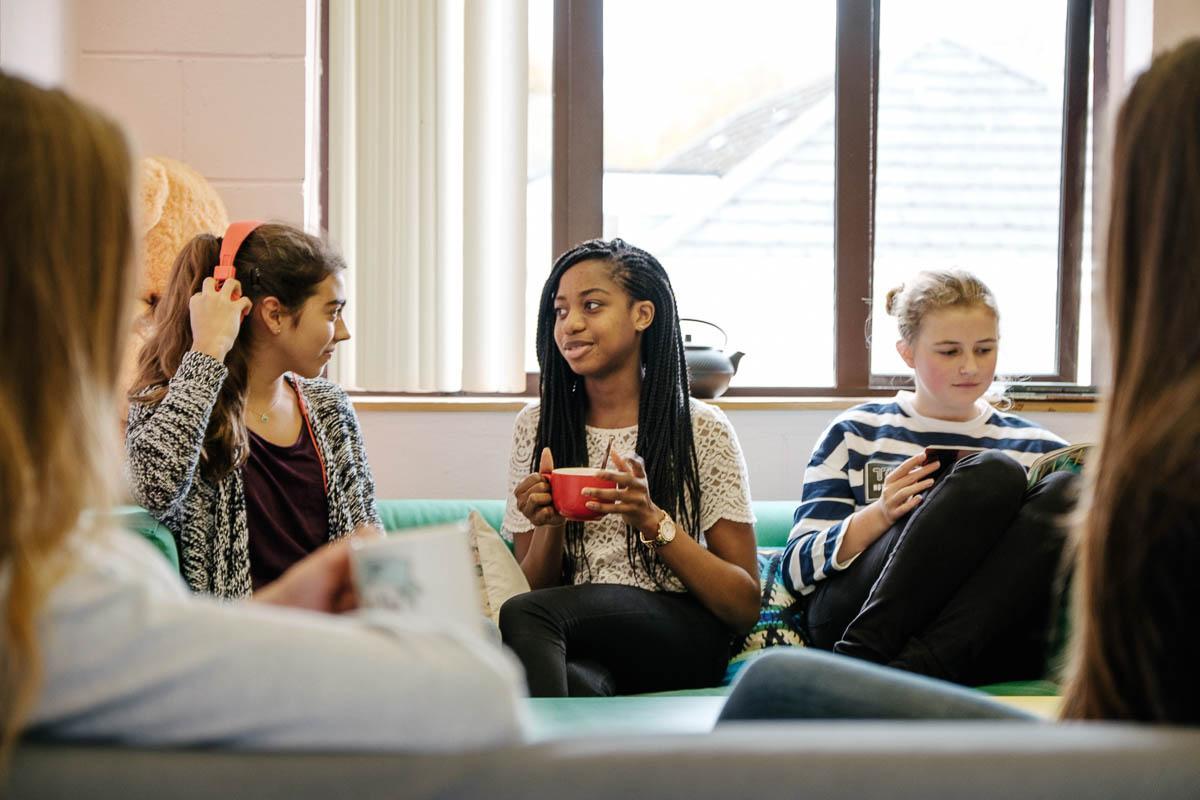 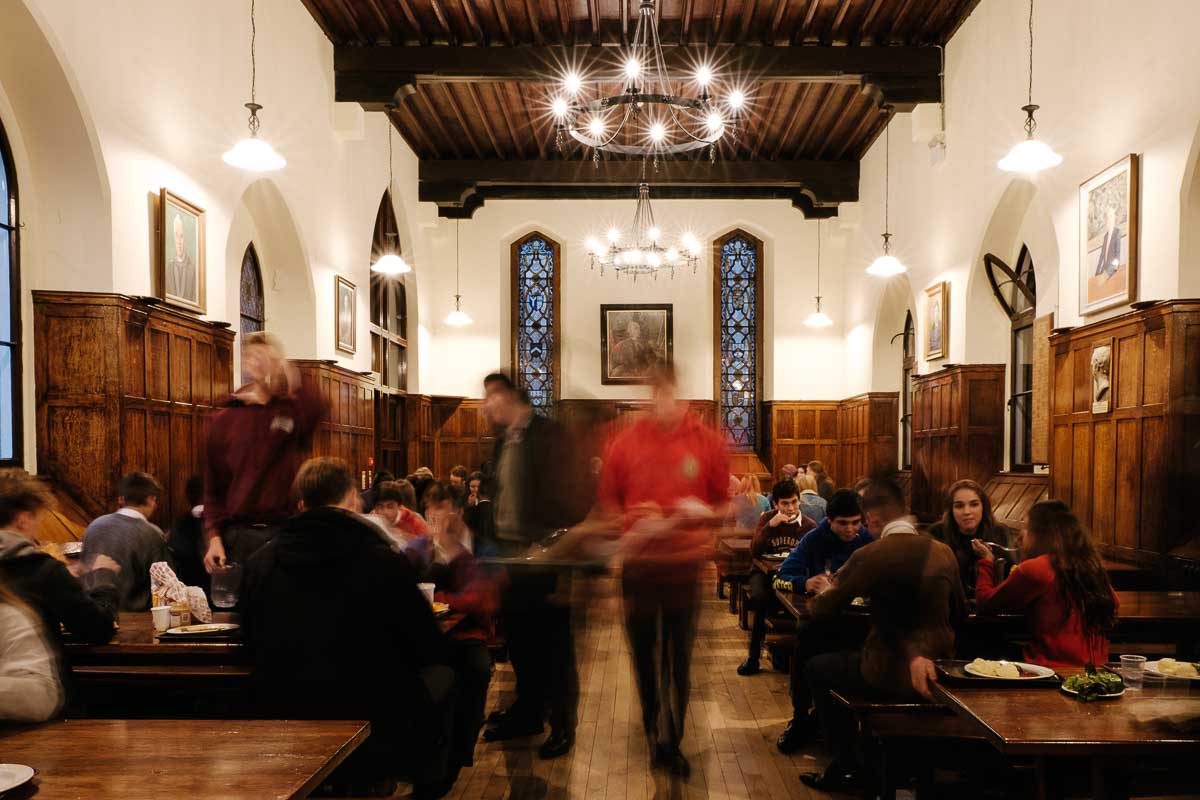 The great majority of our pupils board at the College. We are a seven-day boarding school, with classes on Saturday mornings and a full set of events and activities over the weekends. Now find out more about boarding at St. Columba’s and explore our seven boarding houses.

For families who have not traditionally sent their children to boarding school the very idea might seem very alien. Here are some reasons why boarding might be an attractive option for your children:

Why Board at St. Columba’s?

Fundamental to our community at St Columba’s is our commitment to full boarding. We do have local day pupils, but over 80% of our pupils are seven-day boarders. Visitors are quickly struck by the friendly atmosphere between staff and pupils, and among pupils themselves, and our small size ensures that all members of the College are known to each other.

The Beresford girls live in a beautiful Georgian building which was originally a family home. It is now the heartbeat of the College and known as the main college building. It is made up of the main staff area, offices, the boarding house itself as well as being right beside the dining hall!

Beresford House provides a cosy homely atmosphere for the youngest girls in the College. Girls in Form I live along with a group of about twelve Form V and VI girls. The girls entering Form I make lasting friendships that continue to grow throughout their school days and beyond.

The senior pupils play a vital role in helping to integrate the junior girls.

In the words of one Form I pupil, “ My time spent in Beresford allowed me to be part of a new family. I was apprehensive about boarding life but the atmosphere was always so comforting and made me feel at home. Of course, every school year is going to have their ups and downs but the older girls and house staff made issues much easier and less of a struggle. Everybody in the house was always so supportive of you.”

Day pupils are an integral part of the House. A day pupil writes, “ We always felt included. The day pupils were always made to feel welcome and were invited to participate in many fun activities such as having take-away food and coming up on weekends to visit. I really appreciated that if you had any issues you could go to the house staff and even the senior girls. The senior girls were very kind to us.”

Beresford accommodates 32 pupils and comprises boarders and day pupils as well as a diverse mix of nationalities.

Glen is the oldest house in the College and is the largest boys’ boarding House, catering for pupils from Form II to Form VI. It is named after the Glen stream which flowed down from Kilmashogue Mountain through the school property. The House has had several homes through the decades in various buildings. In 2004 Glen was amalgamated with Grange and moved to its current location, the Grange building (which it shares with Hollypark House), and which also includes four classrooms.

There are 52 beds in Glen in dorms of either two, four or six berths. There are four common rooms with kitchen facilities. Day boys have an area for their academic belongings and a changing and showering area for games. The House ‘hub’ area is a central point for informal meetings between boys and House staff where notices are posted, where Glen Artist-in-Residence pieces are displayed and where a cup of tea and a chat can be enjoyed of an evening.

For the coming year Glen has identified homelessness as a pressing concern in Irish society and the boys have nominated the Peter McVerry Trust as their chosen charity. Our house motto, Lag Not in Zeal is taken from a Romans XII, a text read twice annually in the College – on the first day of the school year and on St. Columba’s Day.

History of Gwynn House
Gwynn house is named after the Reverend Gwynn who was the Chaplain and Acting Warden during his time at St.Columba’s. The house has been situated in a variety of locations over the years. In 2004 Gwynn boarders moved from Garden House to the Founders’ Building and the day pupils continued to use Garden house. From October 2017 day pupils and day boarders moved to the Masterman Library which is connected to Founders’.

Number of pupils in Gwynn
Gwynn is a house that caters for senior boys (25 boarders, 14 day pupils or day boarders) from Form II to Form VI.

Facilities for boarders
Gwynn is a very traditional boarding environment with five dorms, each with 5 beds. The dorms are spacious and every boy has a workspace with ample storage for clothing, books & belongings. Generally, each dorm contains pupils from the same Form. There is one common room in the house with kitchen facilities and a kitchenette for the senior pupils at the senior end of the house. The common room is used by all forms. It is used for house meetings, celebrating birthdays, watching TV and chilling out.

Interaction between day pupils and boarders
All of the pupils in the house regardless of form get to know each other very well. There is a very friendly and homely feel to Gwynn as it is smaller than some of the other houses. Day pupils and day boarders are encouraged to spend time in the boarding house and many enjoy staying late on Saturday evenings to socialise.

Interhouse competitions
Gwynn has a proud tradition of doing well at all of the inter-House competitions such as Rugby sevens, Football, Cricket, Debating, Singing, Hockey, Choir, Drama & Academics.

Charity
For the coming year, Gwynn has chosen Team Hope as their charity. Every year the Gwynn boys help to pack gift-wrapped shoeboxes with toys, sweets and gifts for children in Africa and Eastern Europe. Team Hope is also involved in water filter projects, clothing, housing, medical and educational projects.

Motto
Our house motto is RESPECT. If everyone in the house (staff and pupils) treat each other with the level of RESPECT that we would like to be treated with, then we will reap what we sow.
R.E.S.P.E.C.T is an acronym for

The name Stackallan resonates with the very origin of our unique pioneering school St.Columba’s College in 1843 and its original location in Stackallan House located in the north of County Meath. The name Stackallan is derived from the Irish Teach Challáin, the house of Saint Callan. Saint Callan was an Irish saint of the sixth century, famed for having his adversaries turned into stones. This is not an ability the current house staff use for pastoral or disciplinary purposes!

The College relocated to its current location in 1849. The ‘House system’ in its modern sense was introduced by Warden C.W.Sowby in 1934 and in 1939 a new boarding house called Stackallan was created. It was located in the Argyle building until 1973 when it moved into the Cadogan building.

In 2006 during the most recent phase of College building, Stackallan House reversed the trend of westward movement and returned to the Argyle building. The House now occupies the Upper and Middle Argyle building right in the geographical heart and centre of the College. In real terms this means above the Dining Hall and close to Cloisters and Chapel, saving valuable walking minutes during the working day.

Stackallan House currently is the home to 28 boarding pupils and ten day pupils.  It has four house staff attached to it, all whom live on campus. It has a reputation for traditional values of honesty and integrity, and full involvement in all areas of college life: sport, music, drama and volunteering for charitable works.

The Housemaster of Stackallan is Mr. Michael O’Shaughnessy, who also teachs French and Spanish, and leads university applications. He is assisted by Mr. Humphrey Jones, also Head of Biology, while Mr. Keith Ryan is the resident House Tutor. Ashley Kemp, a member of the hockey coaching staff, is also a House Tutor.

Named after the original and main building on campus, Hollypark is the largest of our Girls’ boarding houses. It opened in 2004 and enjoys stunning views over the city.

It comprises of 12 dormitories, varying in size, housing 52 Form 2 – Form 6 boarder girls. Each form has their own common room, complete with mini kitchen and there is plenty of communal space around the house for us all to get together for social events. Our day pupils are encouraged to become fully integrated into house life sharing the common space with their peers whilst also enjoying their own dedicated facilities.

Life within the house involves all forms mixing together with the older girls representing excellent role models. We foster responsibility, acceptance and a caring atmosphere, which in turn provides a stimulating environment for the girls to learn.

Julie Robinson joined the staff of St Columba’s in 2002 as a Mathematics teacher. She immediately involved herself in boarding life as a house tutor in Hollypark. In 2003 she became a House Assistant before stepping up to Housemistress in 2016. She lives with her husband Ian (also a member of the teaching staff) and son Alex in an adjoining house to Hollypark.

Iona is a boarding house for Senior Girls from Forms II to VI. Currently there are 46 girls in the house, both boardings, day boarders and day pupils. The house was established in 1994 with Mrs Sherwood appointed as the first housemistress. Iona is located in the Fellows Building, which once was home to the now defunct Grange Boarding House.

Iona have chosen to support the Deaf and Dumb School in Sicuani, Peru (once visited by Mrs Sherwood) as their charity for this academic year. The school is run by two Carmelite nuns  and receives no funding from government and are therefore totally depends on donations. Iona are also having a knitting club during activities, knitting hats and scarves for orphans in Eastern Europe.

Tibradden House is located at the heart of the campus and is home to our youngest boys (Form I) with some old pupils acting as monitors, assisting the House Staff on a daily basis.

Day pupils and day boarders are fully integrated into the different houses and participate fully in the life of the community (day boarders remain at school until the end of the evening study, and day pupils go home at about 5.30 pm). Many pupils who begin their time at the College as day pupils enjoy life here so much that they move in to board at a later date.

Tweets by sccdublin
Scroll to top
We use some cookies to ensure that we give you the best experience on our website. If you continue to use this site we will assume that you are happy with it.Accept All CookiesDon't AcceptPrivacy Policy