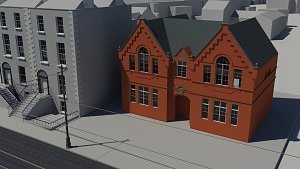 Monday, 5th December, Ms Duggan’s Transition Year History students took part in a project where we learned about an emblematic battle of the 1916 Rising, the Battle of Mount Street Bridge (http://mountstreet1916.ie), partially through using an augmented reality app.

The project is a collaboration between researchers at Maynooth University and Trinity College, the Humanities Virtual World Consortium  and the Andrew Mellon Foundation. The project team and collaborators include military historians, ballistic experts, architects, digital humanists, developers, and virtual heritage specialists, who have been investigating the site of the battle, to test both ‘canonical’ accounts of the engagement and new, rival hypotheses. The aim is for students to use the app that has been specifically developed to interrogate canonical accounts of the battle and test competing hypotheses.

Catherine Butt writes: We went to the Lower Argyle straight after Chapel. We were given an introductory talk by Professor Susan Schriebamnn and Dr Costas Papadapoulos. After they explained how the app worked we assembled into four groups, each of which were given an envelope (and a tablet with the app on it), with information on certain aspects of the battle. For example, my group was learning about the men that were fighting against the Irish rebels in the 1916 Easter Rising, the Sherwood Foresters.

We logged on, opened our envelopes and set to work. First, we had to scan a picture to find out what we were doing. Then, after watching the video, we had to use the sources given to us by the app to fill out a fact file on the type of men who took part in the battle. We then watched a video about how the men were recruited. Next we used primary sources given to us in the envelopes to find more facts about the men. In the envelope we were also given questions we had to answer and presenters cards. After we had finished finding out all the information, it was time for the groups to present their findings. There was a map at the top of the lower argyle and this aided us in our presentation. I liked this as it was nice to have a visual aid to help us to really see what happened. I really enjoyed this activity as I really love learning about Irish history. I love learning about my country and how far it has come in the last century. I also loved using mixed media to learn, it helped me to remember most of the information I encountered. I very much enjoyed being part of the development of this app and look forward to working with the team again.