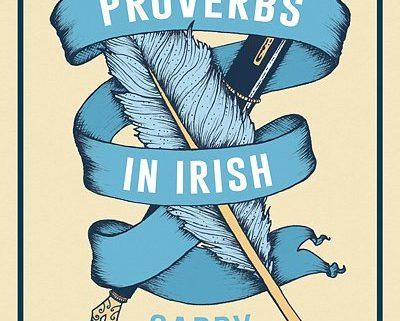 Congratulations to our Head of Irish, Dr Garry Bannister, on his latest excellent book, Proverbs in Irish, published by New Island Books.

An additional Columban connection is that pupil Tania Stokes has supplied the colour illustrations.

In the words of the publishers:

“Proverbs are like people – they can be humorous, sad, old, young, even have their own offspring. But they can also tell us a great deal about the time, the place and the culture that created them.

Proverbs are, however, much more than that. They are windows into our past, and a friendly nod from our ancestors. Sometimes they can remind us of our parents or grandparents as we once again hear their kindly voices speak to us in words of folk wisdom.

This book offers mainly Irish folk proverbs, but there is also a selection from Irish literature, the Bible, and other languages.

Garry Bannister travelled to Russia at the end of the 1970s, where he helped to establish the first Department of Modern Irish at Moscow State University. He has devoted many years to studying the writings of Tomás Ó Criomhthain, the literary works of Pádraic Ó Conaire, and the development of modern Irish literature in the first half of the twentieth century. Amongst his many publications he has to his name a number of popular dictionaries.”