It’s been a positive start to the season for our girls’ hockey teams, although there have also been some poor results. On Wednesday last the senior girls in a dramatic match came back from 1-4 down against Our Lady’s Terenure by scoring 3 goals in 5 minutes to end 4-4. Our squad travels to Glasgow this weekend to compete in a tournament against schools from across the UK and Ireland: you can follow their fortunes on Twitter.

The Senior boys’ hockey team were disappointed with their performance in the All-Ireland qualifiers, hosted in the College earlier this month. They lost to both Newpark and Kilkenny College and failed to advance to the tournament proper. See some photos from those matches here. They have since kicked off their league campaign winning one (against St. Kilian’s), losing one (against Newpark) and drawing against Mount Temple, but still remain in the hunt.

The basketball teams have enjoyed great success over the past month. The senior boys are unbeaten in their league encounters, securing wins over De la Salle, Colaiste Rathlin, Wesley College and Templecarraig. Our senior girls are progressing well in the league and secured a decisive win over Holy Family Rathcoole leaving them 1-2 as we head into the half-term break. The Cadette girls also boast a 3-0 winning streak in the competitive East Region league with wins over Alexandra College, Holy Family Rathcoole and  St. Andrew’s. Ms. Hennessey also led the under-15 East Region Provincial team to success last weekend in the All-Ireland’s, with a 2 point victory over the West Region, the first all-Ireland title in 4 years for the East Region. 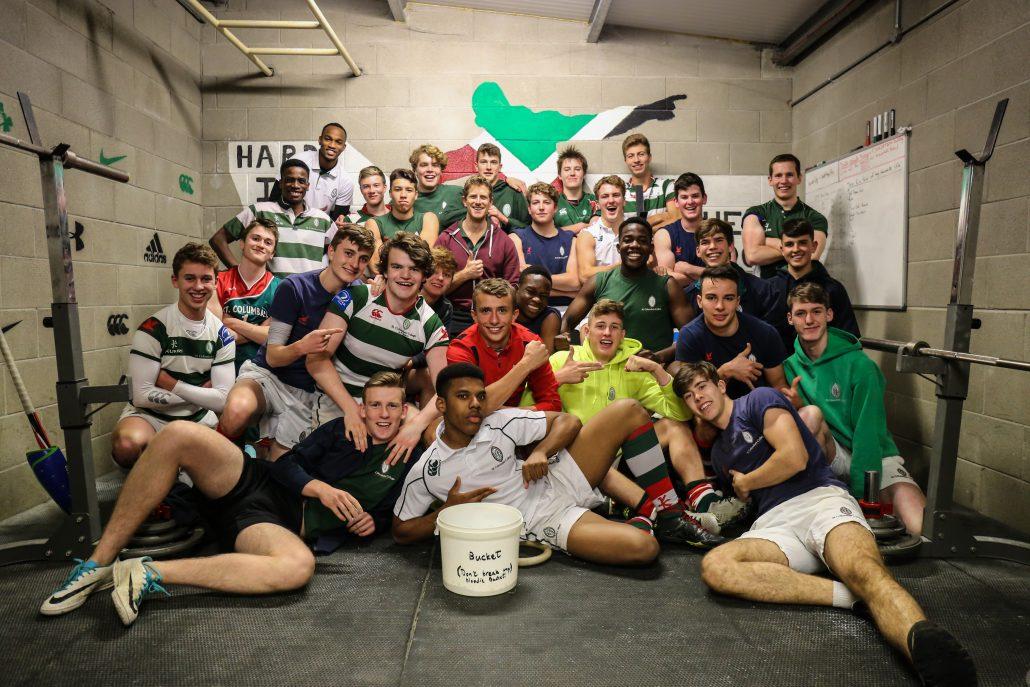 The Senior XV have been in excellent form recently and look to be building towards a strong season. With the cup campaign approaching confidence is high after excellent victories over St. Conleth’s, Sandford Park (7’s) and Templeogue.

St. Columba’s ran in six tries against St. Conleth’s on their return to Old Belevedere after their Shield success six months previously. Max Hopkins grabbed a brace while Kosi Anyim, Adam Murphy, Hector Wright and Thady McKeever also dotted down – Thady added two conversions. St. Conleth’s would cross the whitewash just the once and SCC won 34-5 after a commanding performance. They then took on Sandford in a 7’s fixture, fielding two teams and winning both games. The first game was won 19-12, with tries from Max Hopkins (2) and George Guinness. Conversions were added by Alex Russell and Max Hopkins. The second team secured victory by 24-10 with tries from Sean Cooper, Adam Murphy, James Wilkinson and Ivan Moffitt, who also added two conversions. More recently the Senior XV travelled to Templeogue in a league fixture and won impressively. They scored five excellent tries, through Sean Cooper (2), Max Hopkins, George Guinness, Hector Wright, on their way to a 31-7 win. Their cup opponents will be known soon so watch this space.

The Junior XV are going well also but, unlike the seniors, have tasted defeat since exodus. They also took on St. Conleth’s in the league at Old Belevedere at the beginning of October and also recorded an impressive win. Some excellent work by the forwards allowed the backs to shine in open space. Eight tries in total were scored, two from Harry Petch and the elusive Clement Jacquot and one each from powerful No.8 Thomas Somerville, Ollie Townshend, Mikail Sukhachev and substitute Luis Malaga. The J’s trip to Templeogue ended in defeat, sadly, but there is a lot of potential in this group. With a little more focus and intelligence in defence they could have a very successful season and have the potential to cause any team difficulties. They know how to score tries, which is encouraging, but need to prevent their opponents from doing the same. The game ended 28-17 to the hosts with SCC’s scores coming from Ben Sigurvinsson and Matthew Russell (2), who also added one conversion.

The Leps won their first win of the season against Blackrock U14 D’s last week. It was a chance to blood some of the less experienced JCT squad members and these players proved the difference really. Luis Malaga, in his first season of rugby, revealed his potential with four excellent tries (Luis is a powerful and pacy ball carrier and could yet force his way onto the J’s starting 15 ) while Boris Schavlov added another. They won the game 33-22.

The Ducks have been playing a series of 10 a-side fixtures recently, against De la Salle and Newpark. The promising squad were divided in two even teams for the fixtures against rivals Newpark and both teams beat the Blackrock school by 5 tries to 2. Their first 15 a-side game came against Templeogue last Monday (they had to wait was Storm Ophelia caused the original fixture to be postponed) and their winning run has continued. Three excellent tries from Caleb Owen and another (from an interception) from Tom Larke, saw the home team edge the fixture 24-10, after trailing 0-5 at half time.