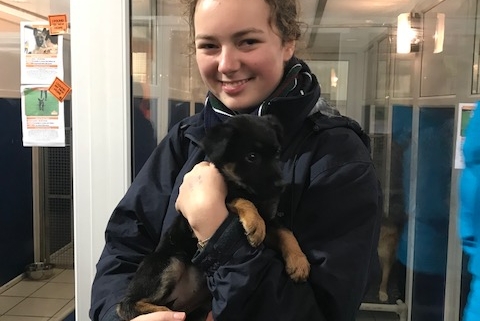 On a rainy day in November, one of the 3rd form sets went to the DSPCA for our CSPE action project. The Dublin Society of Prevention against Cruelty to Animals is Ireland’s largest and oldest animal welfare organisation.

When we arrived, we were given a very interesting and factual talk. We were given a brief history of how animal cruelty came about and learned about some of the work they do at the DSPCA.

In the 1870s Mary Wright Sewell changed people’s views by writing “Black Beauty”. The book was written from the perspective of a horse which was mistreated. Many animal welfare organisations were set up at this time. This was about 150 years ago and cruelty towards animals still goes on. That means people still don’t understand that animals should be treated with respect, or people just don’t care.

The DSPCA was established in 1840 and the centre we visited in Rathfarnham opened in 2003. They have 5 stages when it comes to rescuing animals and they call them the 5 Rs. They are Rescuing the animal. They might have to Rehabilitate the animal as they might be scared of other humans if their owner treated them badly. They will Reunite the animal with the owner if the feel it is right. Otherwise they will Rehome the animal. At the DSPCA they also care for wild animals so they will Release them when they are ready.

At the DSPCA they care for all animals from labradors to African land snails! They help about 30,000 animals yearly. It costs them €3.3 million a year to run. They are an NGO which means they don’t receive any funding from the government apart from small grants. They get most of their money through fundraising and donations. At the DSPCA they only have a few employed professional vet and the rest are all volunteers.

At the DSPCA they have dealt with a lot of appalling cases of animal cruelty. We were told one of the cases. It was about a dog which had fleas. The owner didn’t know what to do so instead of taking the dog to the vets, the owner decided to cover the dog in diesel. The next week the fleas were still there so the owner scrubbed the dog with a Brillo pad. They were still there so the owner decided next to cut the patches of skin with fleas off with a Stanley knife. When the DSPCA found out they cleaned the dog and had to stitch up where the owner had cut the dog. When the dog healed, it was adopted by one of the volunteers.

After the talk we were lucky enough to look around the cattery and the dog kennels. In the cattery there were separate pods which all the healed cats were in. All the cats were very cute but sadly we weren’t allowed to pet them! Next we went to the kennels and the dogs were also very cute. At the end we even got to hold some adorable puppies!

It was a really interesting and fun trip and I would love to go back another day.