In basketball, the Senior and Gadette Girls have reached the quarterfinal stages of the league while the Junior and Minor Girls have had great success in all their friendly games this term which is setting them up nicely for their leagues which will start in January. This term traditionally ends with the annual Christmas blitz; there was an abundance of colour, energy and sporting endeavour (oh, and silly hats and tinsel).

The boys’ senior team have had a difficult season with a dismal return of only two draws in their 6 league matches.  They have played some good hockey at times but find it difficult to exert enough pressure on opposition defences. There have been some good individual performances along the way but perhaps not enough gelling as a team.

The Junior teams have shown some promise thus far this term. The Junior A team are on track for a playoff match in their league but they will need to win some crucial games against St Kilians and Sutton Park after Christmas. The Junior B team is effectively a Form III team and they are being primed for future success.  They have played five matches only losing one against a strong Newpark team.

The minor team have a lot of potential and they have played some excellent hockey at times. They are in a very tough pool in their league having to play against perennial winners of the league Wesley and St Andrew’s College.  As they continue to improve it will be interesting to see them challenge for the u14 cup.

The U13 team is possibly one of the stronger Form I teams we have had for a while. They had a narrow defeat against St Andrew’s College losing 1-2 in a match that could have gone either way. Their remaining matches are against teams sitting at the bottom of the table and wins over them would boost them into a playoff position. Special mention must go to Harry St Leger who has been playing some fantastic hockey. He also sets a good example in his attitude towards training. Most importantly he is eager to learn from his coaches in order to improve.

The rugby teams have been training hard this term.  Even though we lost many sessions to the wettest November in recent history we still managed to play SCT and JCT cup games v Enniscorthy and Skerries respectively. We also played friendlies against Wilsons Hospital, Blackrock, Kings Hospital, Clongowes and Headfort.  Whilst we have struggled against the bigger schools we have performed well in all matches. We look forward to Shield competitions and league knockouts next term.

Well done to Kate Dementyeva and Georgy Dementiev who competed in the All Ireland Schools Judo Championship and had some good success. Kate won a Silver medal in the Junior Girls <52kg division, and Georgy got a win out of 4 tough matches in Junior Boys <50kg.

Once our Senior pupils play one of our ‘traditional team’ sports they can choose an additional sport or activity. This year a new initiative was introduced which is proving very popular. Hopefully, it will lead to more of our pupils taking up and playing golf on our nine-hole golf course in their free time. Nine pupils, five senior boys and four girls, are taking weekly golf lessons with Josh Adams a PGA professional in Stackstown golf club. When the weather is too poor be played outside they use an indoor facility featuring a Trackman golf simulator. Our Junior pupils were offered the same optional opportunity on Sundays but there was very little take-up. Perhaps there will be more interest when the weather improves and the days get longer.

On Saturday mornings, we have five academic classes. After that most of us break off to play our respective sports and get some exercise. One sport that is more hidden than the mainstream is archery. Archery is a non-reflexive sport that is as skilled as it is difficult. At 3:30 pm after the mixed basketball is finished, the archery team flock into the Sportshall.

Our coach Pat McLoughlin is always there to greet us. We set up the stands and string up our bows and begin our training. Normally we have target faces to shoot at but this term we have refrained from using them. We do this so that we are not thinking about which coloured ring we are going to hit, but rather how our shooting feels. Without the distraction of the target, we can feel how good or bad our shots are. Our coach Pat will go even further and ask us to close our eyes ‘Star Wars’ style and really ‘feel’ the firing and ‘force’ of the arrow when shooting.

Our team, consisting of Iona Chavasse, Gioia Doenhoff, Zian Wang, Avi Johnston and the new recruits Tessa Pullman and Iris Foster have really improved. The training with no target faces means that we now know how to self improve our shots and fix small mistakes without guidance. Thanks to Pat’s training we are ready for the inter-school competitions coming in the new year.

We aim to repeat and improve on our successes from last year. Team Captain Avi Johnston is confident that her team will be ready when the competitive season hits.

The latest edition of The Submarine, edited by Avi and Edna Johnston, is now out, and can be read online (and downloaded) here. Among the articles are ones by Éile Ní Chianáin about her experience of the recent Climate Change Youth Assembly, Elise Williams on the UCD Leinster Debates, Cian Slyne on dystopian societies, and Zofia Cannon-Brookes, as well as lots of pupil art work.

Team Hope’s Christmas Shoebox Appeal is a wonderful charity that provides shoeboxes full of toys, treats, school stationery, hygiene products and clothing for some of the poorest children in the world. The College has been involved with this amazing charity for over 15 years and this year, once again, the Transition Year pupils have been actively involved. Pupils have already created over 200 festively wrapped filled boxes to date and have also fundraised through their mini-companies. They have also visited the Team Hope warehouse over the past few weeks packing the filled boxes into the lorries destined for Eastern Europe and Africa. A particular thank you to Mr Cron who has been driving the College’s involvement in the charity from day one, and to the other staff who accompanied the pupils to the warehouse in the evenings. Team Hope is once again the Gywnn House charity in 2019/2020. 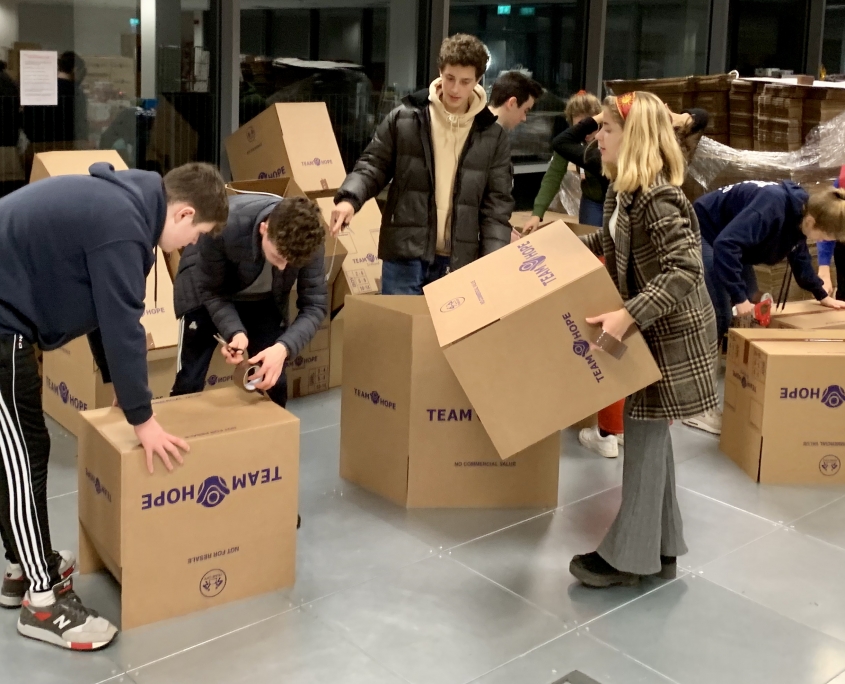 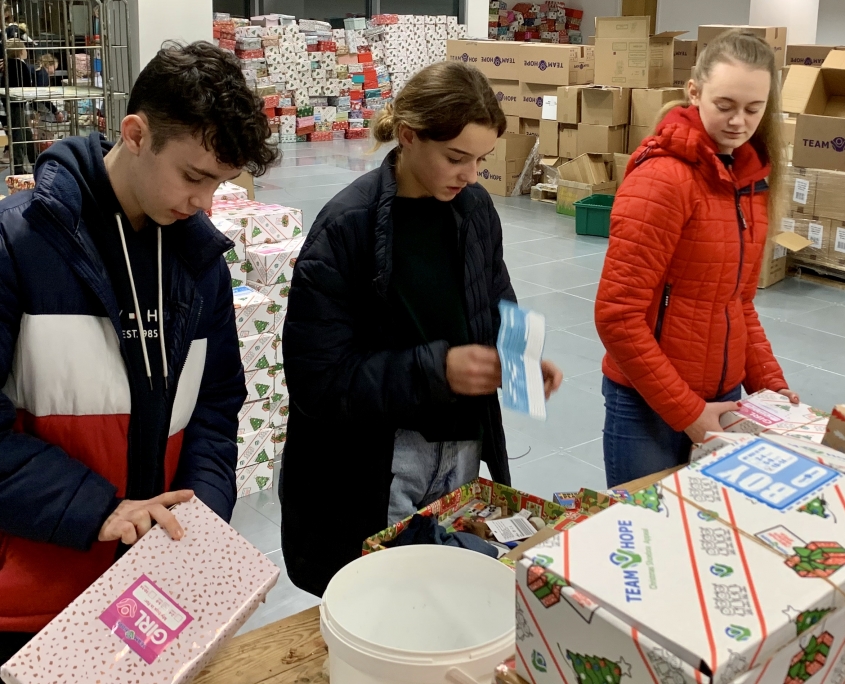 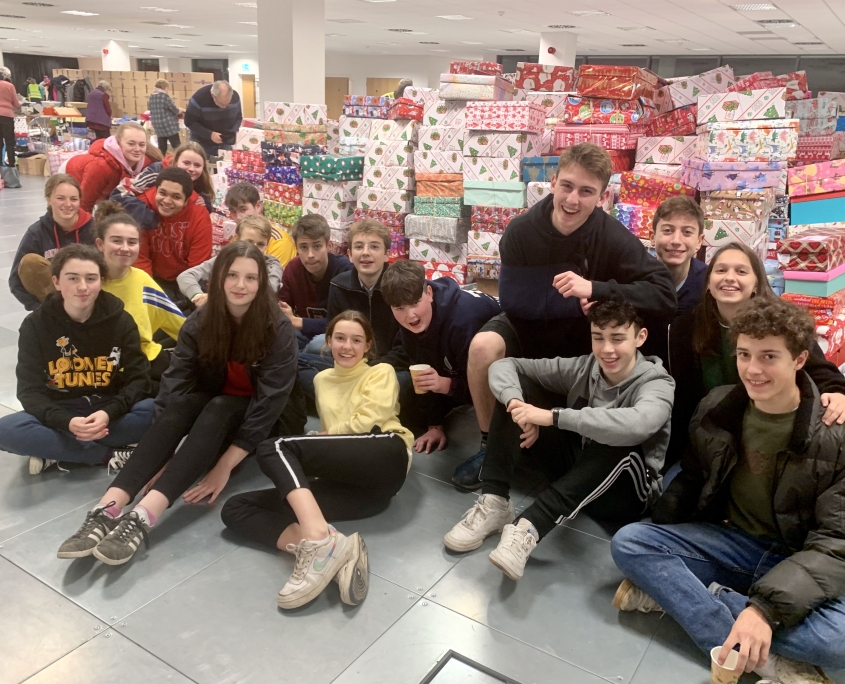 Our Librarian, Ms Kent-Sutton, has put together a list of ten of the best Young Adult books from recent months. It’s below, but you can also download it (with images of covers) for printing out here. Included is the much-acclaimed first novel by Old Columban Sarah Davis-Goff, Last Ones Left Alive.

Read about all ten books on the English site here.