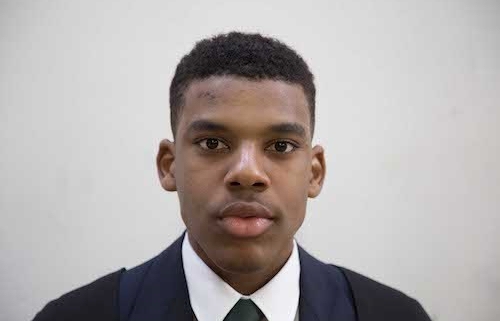 We have been deeply saddened this week at the untimely passing of Tobias Onyeka-Patrick, Old Columban, who left the College the summer before last.

Tobias ended his lengthy struggle with illness on Thursday and he is fondly remembered by all his friends here, by those who lived with him in Glen House, those who taught him and those who trained and played with him on College teams. Gentle manners, a ready smile and a wonderful warmth of personality were all hallmarks of this unique young man.

Tobias joined his younger brother Edward in the College in September 2017 in Form V; he is pictured that month. In both years as a pupil he represented the 1st XV in rugby. He served as a House Captain in Glen in VI Form where he was popular and well-liked by all. Tobias was a creative person with a talent for music, particularly as a hip-hop vocalist.

Unfortunately illness prevented him from sitting his Leaving Certificate in 2019. All through the 18 months of his illness we were bowled over by his fortitude, grace, courage and a dignified bearing that was almost saintly to behold. The impression he made has been enormous. Our thoughts and prayers are with all the family at this difficult time, especially his brother Michael in Form III.

On the evening of Wednesday 14th October a small group of pupils and staff met in the Chapel, properly distanced, to remember Tobias. This was recorded for others to listen to, especially his family and Old Columban friends, who cannot currently come into the College. Listen to it below.