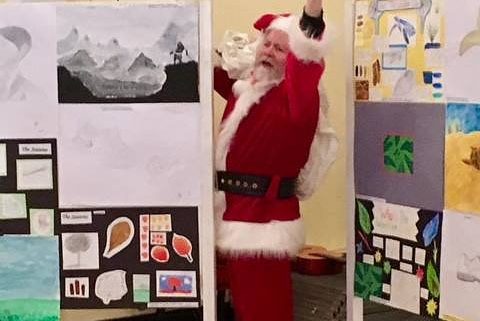 Jiwoo Park writes: The pupil versus staff Christmas debate took place in the BSR on Monday 12thDecember. The staff, represented by Ms. Smith, Mr. Jones and Reverend Owen proposed the motion ‘This house believes in Santa’. Opposing the motion was Harry Oke, Freddie de Montfort and me. The debate was introduced and chaired by Ms. Duggan and Maria Weinrautner was the time keeper. Happily, quite a few spectators came along to join in the festive spirit of the debate.

There were some excellent arguments presented about the human need to suspend disbelief in the bleak mid-winter and make merry with the idea of a benevolent benefactor. The chaplain was given a run for his money by Harry Oke, who quoted liberally from the Bible. In short, there many great speeches, but the emotive arguments –coupled with a dollop of bribery and the appearance from the man in the red suit himself – won out in the end. Minced pies and sweets were shared by all and the debate was settled: St Columba’s does believe in Santa! It was an enjoyable event, and I hope it becomes a permanent fixture on the debating calendar.