Sunday 17th November 2019 is the 100th anniversary of a sad event in the history of St Columba’s College. 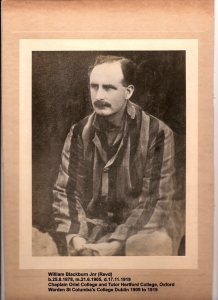 The Warden in 1919 was Reverend William Blackburn. He came to the College in September 1909 from Oriel College, Oxford, where he had been Chaplain for some years (he had previously gone to school at Repton in Derbyshire). On arrival he paid from his own funds things needed at the College, including the refurbishment of the Warden’s Drawing Room, and as G.K.White writes in his history of the College, “the ten years of his Blackburn’s Wardenship were something of a golden age in Columban history, “with numbers rising to a record 118 during the War”. In addition, “the financial position remained sound throughout, proving that the Warden was a good manager” and for once the College did not suffer from a financial crisis. He was “a born schoolmaster with an impressive personality and infectious enthusiasms… [his] popularity sprang chiefly from his friendliness, approachability and sense of humour.” In 1919 also the Masterman Library opened, thanks to the efforts of Mrs Blackburn, née Masterman, in memory of her brother, who had died in the Great War. 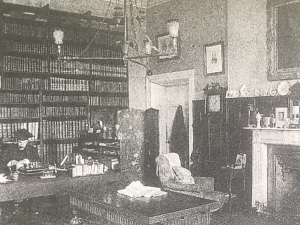 And then “in the prime of life, in the full flood of activity, apparently in perfect health [he] died in his sleep in the early hours of November 17th 1919.” At breakfast that Wednesday, the Sub-Warden, Mr Attwood, stood up and announced to the boys that the Warden had died during the night. 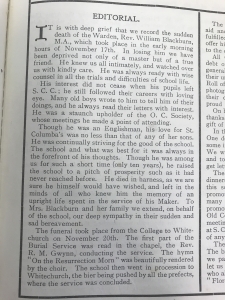 The black-framed Editorial in The Columban magazine of December 1919 reads: ‘It is with deep grief that we record the sudden death of the Warden, Rev William Blackburn, 40 (he was actually 41], M.A., which took place in the early morning hours of November 17th. In losing him we have been deprived not only of a master but of a true friend. He knew us all intimately, and watched over us with kindly care. He was always ready with wise counsel in all the trials and difficulties of school life… The funeral took place from the College to Whitechurch on November 20th. The first part of the Burial Service was read in the chapel, the Rev R.M. Gwynn conducting the service. The hymn ‘On the Resurrection Morn’ was beautifully rendered by the choir. The school then went in procession to Whitechurch, the bier being pushed by all the prefects, where the service was concluded.’ Warden Blackburn was buried beside Warden Morton (who died in office in his early 30s). On December 1st Mrs Blackburn and her children left the College and Ireland, moving to Brighton.

For the second time, Reverend ‘Robin’ Gwynn became Acting-Warden. In July 1920, there is one item in The Columban under ‘Birth’: ‘Blackburn – June 11th 1920, the wife of late Warden Blackburn, of a son.’ So Mrs Blackburn had been just two months pregnant when her husband died. 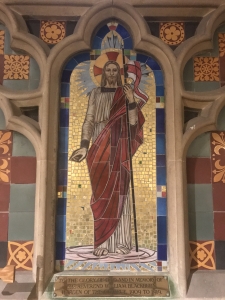 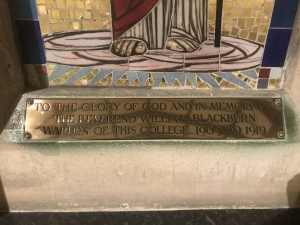 The memorial to Warden Blackburn was installed in Chapel on Easter Eve 1921 (around the same time as the Old Columban Memorial for the Great War – the Chapel Square cross and the plaque in Chapel). It is on the reredos (the screen covering the wall behind the altar), being is a figure of The Risen Christ in a mosaic by Sarah Purser (1848-1943) of the stained glass co-operative An Túr Gloine (she also restored the Founders’ windows in the Dining Hall) with below it a brass plaque reading:

TO THE GLORY OF GOD AND IN THE MEMORY OF
THE REVEREND WILLIAM BLACKBURN,
WARDEN OF THIS COLLEGE, 1909-1919. 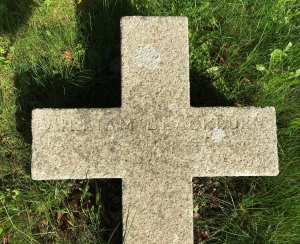 Warden Blackburn’s grave in Whitechurch features an inclined granite cross in a kerbed space for two graves. By this century, the lettering on the cross had become severely eroded, so much so that the lower parts of it were unreadable, so the College decided to mark the centenary of the death by restoring it. However, family permission was needed for this, which was challenging: the (English) family left the country one hundred years ago. 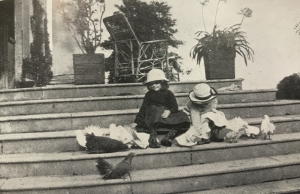 There was one promising avenue of inquiry. At the time of her father’s death, Barbara Blackburn was 9 years old. In the 1980s under her married name she become famous as a TV ‘celebrity’ on the BBC as Barbara Woodhouse (1910-88), presenting ‘Training Dogs the Woodhouse Way’ and appearing in many other programmes. Eventually the College was able to be in touch with her daughter Judith, and thus received permission to improve the grave. 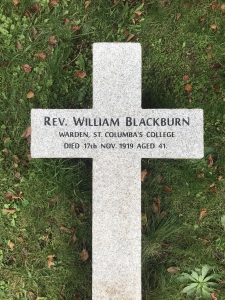 The restoration has now been completed by M. Roe and Sons, with the cross cleaned, smoothed and re-engraved, and the kerb also cleaned (the grass in the picture is natural for graves in Whitechurch). At a short ceremony, the College has just marked this with prayers and a simple commemoration by Canon Horace McKinley, Rector, our Chaplain Reverend Daniel Owen, the Warden, Sub-Warden, former Chaplain Reverend Michael Heaney and two Prefects, representatives of the pupil body. On Sunday 17th itself the Sub-Warden will give a presentation to the College at the start of Evensong on this part of our history, with ‘On the Resurrection Morn’ again being sung, by the Chapel Choir. 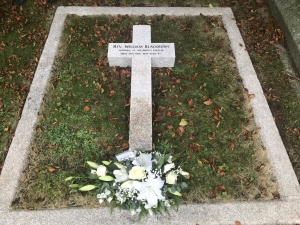 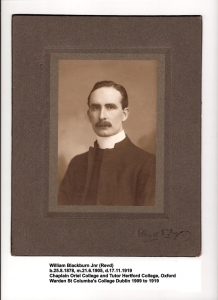