On Tuesday last the Senior Rugby XV continued their winning streak as they packed down against a dogged and physical Coláiste Cill Mhantain side on home soil. The game was only a mere seven seconds old when SCC’s flanker James Wilkinson was very harshly shown a red card for what the referee deemed to be a dangerous tip tackle, sending SCC management and fans into a state of turmoil. What management and fans did not realise was that this was the catalyst which sparked what was to undoubtedly become one of the finest displays of never say die rugby ever witnessed here in SCC.

Cill Mhantain struck first with a converted try following a penalty inside the St. Columba’s twenty two, their advantage was doubled eight minutes later with a breakaway try from a gathered lineout inside their own half, the scoreboard now read 14-0, but things were about to get worse.

Cill Mhantain raced into a 19-7 lead, however, SCC’s opening try from Kosi Emmanuel – Anyim with the conversion by centre Hector Wright added some stability to the home sides’ endeavours. SCC struck again following a break inside their own half with a fabulous kick for the line by Ivan Moffitt who was now beginning to dictate the ebb and flow of the Columban back line. The lineout was won and brought down for the SCC forwards to drive for the line. Tipperary’s Joseph Gernon rolled over the line with the conversion being sweetly slotted by Thady McKeever, the score now read 19-14, SCC were on the march.

The passion and sheer determination of the SCC pack was infectious with students and parents dotted around the sidelines roaring their approval. A lineout inside the Cill Mhantain ten metre line was collected by Adam Murphy who was escorted over the line by a fantastic forwards pack, Thady McKeever stepped up to take a conversion at what many would call an impossible angle. However, the acuteness and pressure of the kick completely unfazed young Thady who nailed the conversion much to the delight of the vocal crowd. Somehow the scoreboard now read St. Columbas 21, Cill Mhantain 19, but SCC were not finished yet. 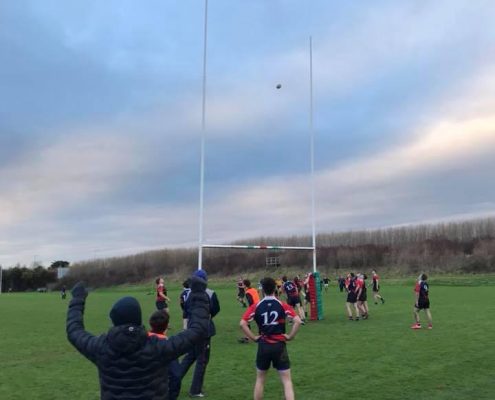 Thady McKeever’s touchline conversion bisects the posts to put SCC in the lead for the first time in the match.

A kick over the top bounced sweetly for the rampaging Moriz Boyen who was taken out by a sweeping leg from the Cill Mhantain outhalf stopping a certain try, but Seán Cooper darted to collect the ball and with great poise dove under the posts for SCC’s fourth try of the game, which was complimented by the trusty boot of Thady McKeever who pinged the ball between the posts to end the game 28-19 in favour of the SCC side.

Not only did Columbas play the entire game with 14 men, they had to endure two sin-binnings in either half which left the side reduced to 13 men for a total of twenty minutes. This game was a privilege to witness as the likes of it are rarely seen at an international standard let alone schoolboy rugby. Confidence is high within the SCC camp and rightly so, but there is more to come from this dogged side and we eagerly look forward to our upcoming game in Gorey RFC against Carnew on Tuesday December 12th.