That lovely late-season annual event, Voices of Poetry, took place on Sunday evening in the Big Schoolroom. It is a fine pause in the maelstrom of the ending of the school year, just before examinations start: listening to great verse in many languages is balm for the soul.

Again Mr Swift co-ordinated with his characteristic skill and lightness of touch. Helen Crampton started with a reading of the first poem she had learned as a child, Wordsworth’s ‘I wandered lonely as a cloud‘ (aka ‘Daffodils’), followed by Mr Finn’s strong recital of D.H. Lawrence’s evocative ‘Piano‘ (‘Softly, in the dusk, a woman is singing to me’). He was followed by Iona Chavasse’s ‘Wild Like the Sea That Raised Her’, composed in the Poetry Slam in March, a haunting incantatory piece.

Two highlights were readings by this year’s winners of the poetry prizes, Emma Hinde (junior, with ‘Tree-maker‘) and Tania Stokes (senior, with her sonnet ‘Seeing Tunnels‘).

No better way to finish it all off than with William Carlos Williams’s ‘This Is Just to Say’, read by Daniel Murray: 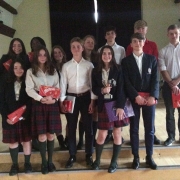