That lovely late-season annual event, Voices of Poetry, took place on Sunday evening in the Big Schoolroom. It is a fine pause in the maelstrom of the ending of the school year, just before examinations start: listening to great verse in many languages is balm for the soul.

Again Mr Swift co-ordinated with his characteristic skill and lightness of touch. Helen Crampton started with a reading of the first poem she had learned as a child, Wordsworth’s ‘I wandered lonely as a cloud‘ (aka ‘Daffodils’), followed by Mr Finn’s strong recital of D.H. Lawrence’s evocative ‘Piano‘ (‘Softly, in the dusk, a woman is singing to me’). He was followed by Iona Chavasse’s ‘Wild Like the Sea That Raised Her’, composed in the Poetry Slam in March, a haunting incantatory piece.

Two highlights were readings by this year’s winners of the poetry prizes, Emma Hinde (junior, with ‘Tree-maker‘) and Tania Stokes (senior, with her sonnet ‘Seeing Tunnels‘).

No better way to finish it all off than with William Carlos Williams’s ‘This Is Just to Say’, read by Daniel Murray:

On Tuesday night the seventh annual TY Modern Languages evening was held in the Big School Room. Eleven pupils presented in Spanish and French on topics such as El Flamenco, Le Tour de France, Las tribus de América and Les Jeux Olympiques. Leon Moreau also gave an outstanding recitation by heart in Bavarian of a childhood poem. During the interval we we enjoyed lusty renditions of the German and French national anthems.Many congratulations to the winner and recipient of the Alyn Stacey Cup, Sveva Ciofani, for her presentation on Pablo Escobar. In second place was Eliz Kolat (Les stéréotypes français) joint third were Oliver Townshend (Mis aventuras con Diego) and Sinead Cleary (Les fromages français). The standard overall was extremely high. Well done to all those who participated and made this such a successful event. 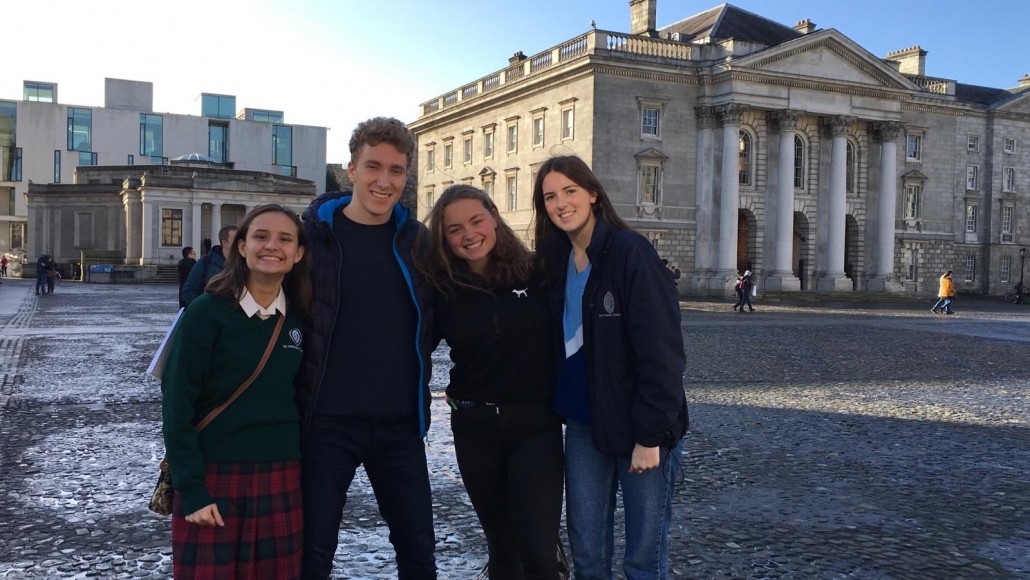 When I put my name forward to go to the ‘Phil Speaks’ debating competition in Trinity, I was very nervous about what was to come. What would the motions be? Would I even understand the motions? Would I get lost in the maze that is Trinity College Dublin? And perhaps most importantly, would there really be free pizza there!?

Thankfully I only got lost once and there was pizza ordered in bulk both days! As for the motions, more random than Harry Oke-Osanyintolu had warned us. Our first motion was  “This House Believes that the media has a responsibility to show the full horrors of war.” Katherine Kelly and I had 15 minutes to prepare our five-minute speeches. To say that this was stressful would be an understatement, the 15 minutes flew by and before we knew it we were strongly opposing the motion. It was an interesting and engaging the debate in which we placed 3rd. Not bad we thought, against a strong proposition.

The next motion was “This House regrets the American Dream.” This proved difficult to propose, as the debate became centralised on the concept of whether hard work equals reward, a central idea in our society and of course the educational system.
We emerged from this debate in 4th place but with increasing knowledge of debating strategies and approaches which would prove useful.

After a filling lunch of Apache pizza, we were given our third and final motion of the day. “This House Would delete all social media.” Katherine and I were proposing this motion, we used our gained knowledge of how to coherently structure a debate, forming it almost like a mathematical equation, proving points x and y, to our advantage. This round was a closed round, which means we don’t know where we placed, but our tactics were proving effective and became procedure in our two next debates.

The next morning we registered again, with a slight change to the teams. Katherine and I stayed together while Shannon Dent paired with Dmytro Kasianenko in place of Oda Michel who unfortunately wasn’t feeling well. The motion was announced and Katherine and I had 15 minutes to scurry off to the School of Histories and Humanities Arts Building, (this was when we got lost.) We were proposing the motion that “This House Regrets art that glorifies gaining material wealth”. With Dmytro and Shannon on our tea,m we gave the opposition a united Columba’s front! It was an interesting debate, focused around the excessive wealth of popular musicians and online influencers, each team managed to work an Ariana Grande reference into their speech as part of the ‘Goofball Challenge.’

Our fifth and final debate was “This House Believes that occupying vacant buildings in protest of widespread homelessness is a legitimate political act.” For our last debat,e Katherine and I used all of our gained knowledge from the four previous debates into a strategical and tactical argument. We both spoke for the full five minutes and we felt like we had strongly and convincingly proposed our last motion. Unfortunately, we didn’t earn a place in the Quarter Finals but what we definitely earned was a sense of achievement and a wider knowledge of how to structure and deliver a clear-cut speech within a debate. We also met secondary school pupils from all over the country, and we had an opportunity to explore Trinity also! I would definitely recommend The Phil Speaks Debating Competition to anyone and it was a very enjoyable experience.

Scroll to top
We use some cookies to ensure that we give you the best experience on our website. If you continue to use this site we will assume that you are happy with it.AcceptPrivacy Policy