The Reverend B.W.N. Walsh Memorial Concert was held last night in the Chapel to mark the Walsh Fund for restoring the organ. It was a superb evening of high-class music-making, particularly by the ‘headline act’, the Old Columban Colm Carey.  Click here for some photographs.

The large audience was welcomed by the Sub-Warden, Julian Girdham, who thanked all subscribers to the Fund, including the Walsh family, who were well-represented. Then former Chaplain Michael Heaney gave a tribute to his predecessor ‘Bert’, a much-loved long-serving colleague, who as well as being Chaplain and a teacher of Religious Studies was a distinguished Head of the Irish Department.

Then the concert began. Currently Master of Music of the Chapels Royal, HM Tower of London, Colm Carey started his career on the organ as a teenager in our Chapel under David Milne and Chris Jenkins, and has gone on to an impressive performing and recording career. His complete mastery of the instrument was obvious from the opening piece, a spectacular delivery of Egil Hovland’s Toccata, ‘Now thank we all our God’.  Angela Hicks (soprano) sang exquisitely throughout the concert, including a stunningly controlled version of Schubert’s Litanei auf das Fest ‘Aller Seelen’ and the engaging love song ‘Sweeter than Roses’ by Purcell.

The choir, who in December travel to Amsterdam to perform in several venues, gave us Bach’s ‘Sheep May Safely Graze’, and Mozart’s beautiful ‘Laudate Dominum’ in support of Angela Hicks.

Colm Carey’s virtuosic skills were in evidence in a wonderfully varied programme, the rest of which included pieces by Locklair, Hakim and Karg-Elert, and a memorable Durufle ‘Veni Creator’, with plainsong intervals by Angela Hicks.

The concert concluded with the choir’s resounding rendition of George Hewson’s “Let us Now Praise Famous Men'”. The standing ovation for organist and soloist at the end was thoroughly deserved. It was a superb evening, and a deserved tribute to Reverend Walsh, and is now memorialised by a new brass plaque on the organ casing.

Refreshments and chat were enjoyed by all in the Big Schoolroom afterwards. 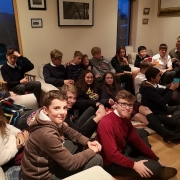 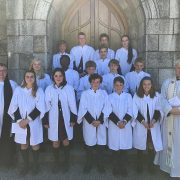 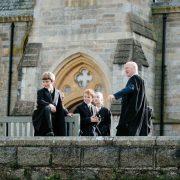 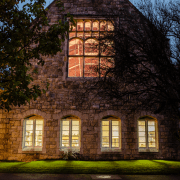 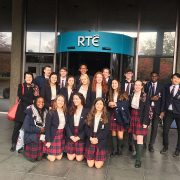