Well done to the St. Columba’s College Senior Cricket team who recently won the Fanagan trophy. The trophy is named after and awarded by Mr. John Fanagan (former Head of English at St. Columba’s) to the winner of an annual fixture between SCC and Sandyford Cricket Club. St. Columba’s set a target of 125 runs off their 20 overs (7 wickets taken) – Thomas Meijer with an impressive 63. Sandyford started strongly but some excellent fielding (including an tremendous catch from George Guinness) put pressure on the visitors. In their final over, and with three wickets in hand, Sandyford needed just 5 runs to win but Form III pupil Daniel Swift nervously bowled an excellent final over. He limited the visitors scoring while also claiming one wicket with a great bowl, and seeing Sandyford’s final batsmen being run out going for a second run. The game end with Sandford on 124-9 and St. Columba’s winning with the narrowest of margins. 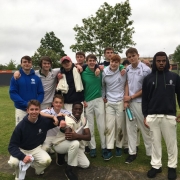