The cricket season started on April 18th and effectively ended on Wednesday last, five weeks later. In that time twenty six matches were played across the teams, albeit with two First I matches to come against Headfort. Their First Year B team were introduced to the rudiments of the game. The First Year A team contains some decent and potentially solid cricketers. They were certainly competitive in their matches. The Senior Team were keen and worked hard however they have not yet played enough cricket or spent enough hours training to compete with those who have done so for years. Nevertheless they managed an excellent league win against a useful Rush team, winning by two runs. They also played competitively in our enjoyable annual fixture against the Leprechauns Cricket Club.

The highlight of the season was the Second XI’s win in their League semi-final against Wesley College. This win by nine runs was marked by a four and three wicket haul by Harry Oke and Harry Kelly respectively. Also Juhyun Kim took five catches at long on or fine fine leg! They lost in the final against Clongowes Wood College First XI playing in the Senior B League. We have just completed two weeks of snappy, ‘Sports Day’ cricket which has involved everyone in the school. If we are to build on the coaching done so far in this frenetic season, as many of our cricketers who live in cricket playing countries as possible need to play for a club in the holidays. That is if they are to progress and develop for next year’s competitive school season. 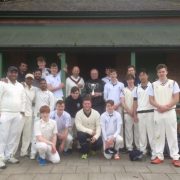